My experience of Fashion and You and what I got

on July 03, 2011
For quite sometime, there has been so much of hullabaloo over this website. Curious as I am like a cat, I wanted to get something from here too. Seeing Mehak from Peaches and Blush purchasing Faces cosmetics, I was waiting for an opportunity. She successfully tempted me to indulge in the blushes and since I did not want anything else, I ordered inly two blushes-- One a regular blush in Rosegold and the other Pink Topaz mineral blush. I will review them separately but I can tell you I am so loving them.
Anyway, coming down to Fashion and You

When I registered, I got some points that would have made things cheaper. but unfortunately, the points have an expiry date and call it total bad luck, the Faces Cosmetics offer was on right after the day my points expired. Anyway, no point crying over it. So I went ahead and bought these two 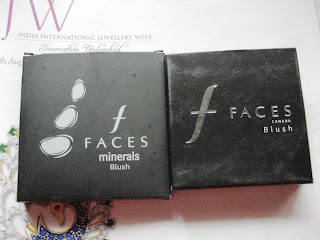 I ordered somewhere around 24th of May ( I dont exactly remember). The next day I received a call from their customer care conforming the order. After a day or two , on 27th of May, I received an email with the information that my order has been dispatched and that i should be receiving them within 2 to 7 days).
Fine, I was waiting but two weeks passed I did not receive anything.
After one more week ( ie 3 weeks later) I called their customer care and a woman received it. Well, I was pretty put off by her. First she was trying hard and really hard to put on fake American accent. I hope an American doesnt listen to this else s/he would be thinking this woman was mimicking her :P

I don't intend to be spiteful, she was just doing her job, but why the fake accent? Personally I dont care if you speak in the simple Indian  accent of your mother tongue as long as you speak it right or express yourself properly and above all I hate fake accents. but that's personal.
A week later I received a call from the courier service asking me the location of my house. I gave her the directions and asked her when i should be expecting the parcel. She said they'd call. Here comes the funniest part. since my exams were going on I could not carry my mobile around. if you carry your mobile and keep it switched on in the hall during your Bachelors or Masters under CU, you may not only be disqualified, but also arrested ( as I hear). Anyway, the bottom line is, if you are appearing for an exam you can not carry your mobile phone. I told the lady that my exams were going on and I can not keep it switched on all the time because I might be even penalized they dont need to call me while making the delivery and if they can bring it after 6pm.  can you believe what she said?

* In a nasalized voice* " noooo maaam pleeeeeease keep your phooone switched oooon". At this point I was really put off since I had already explained my situation ( She was doing her job, cant we expect a little cooperation in stead of stupid remark?) This time I said, I cant help it if they can manage it it would be really helpful. She first informed, if I'm not home the parcel would go back to Delhi). Normally , in my area if you order something and if you are not home on their first visit they come back a second and last time later.
She said that my parcel would be delivered within a day or two. I received my parcel that weekend.

however irritated I got from the long wait and everything, I was so happy that my blushes arrived in perfect condition. They were not expired and was not at all damaged.

Now my complaints against Fashion and you
1) The pints should not have an expiry date. We would definitely make more purchases and may ultimately end up buying more frequently if the points were there.
2) I wanted to unsubscribe from the SMS alert. No matter ho many times I unsubscribed, the texts dont stop. I emailed them to help me out, they stopped the email alerts instead. I had to switch it on again from my own account.
3) There are many Indians who hate fake accents. Why try so hard? What are you trying to prove?
4) When I was told that I should be received the good within max 7 days, i took the words literally. The products actually arrived after more than a month.

What I liked:
1) They have a Cash on Delivery system. So, you wont lose your precious money. I wish all the companies had cash on delivery system.
2) They have a referral reward. Although I have not invited anybody, I am putting the link here. You can use it. But mind, if you use it, I would get some points which would help me get some discount on my purchase

But many people have complained that they did not get the referral rewards, got wrong products, etc. Although I myself did not face it ( there had been no complaints against cosmetics so far), I would like to remind you to see other reviews al well before you make your decision.

3) I got a huge discount. My product were worth 700INR. I paid only 509INR including shipping

Shall I order again? I wont buy the apparels but I would purchase cosmetics again


Did you purchase anything? what was your experience like?
Fashion and You Haul Online Shopping