on November 16, 2011
For some time, Lotus has been surprising us with their products. Initially I was not impressed. But recently what impressed me was their range of lipsticks. You know how I have been whining about the products not suiting me. This time I had been brave. Reason? My mum, who would wear nothing other than Lakme saw her friend using a particular shade from Lotus. She loved it so much that she got the number. Since Lotus has a number of ranges of the lipsticks, I asked her how the body looked like and all she said was 'like a lipstick'. Baffled, I kept checking and at last I found the shade. 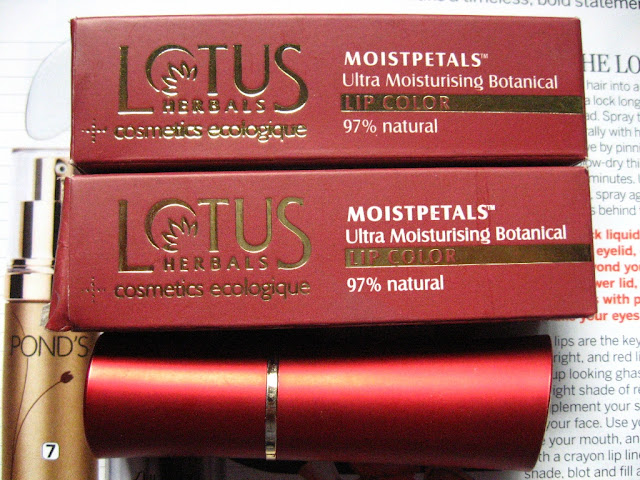 I was tempted to try one for myself as well and the SA convinced me to sell me a shade that I never wore before. yes, however fond of bright lipsticks I may be, I never wear the dark per se. So, i thought why not? That was a mistake may be because  don;t wear this too often.
Anyway, coming back to them, these are quite a good quanity 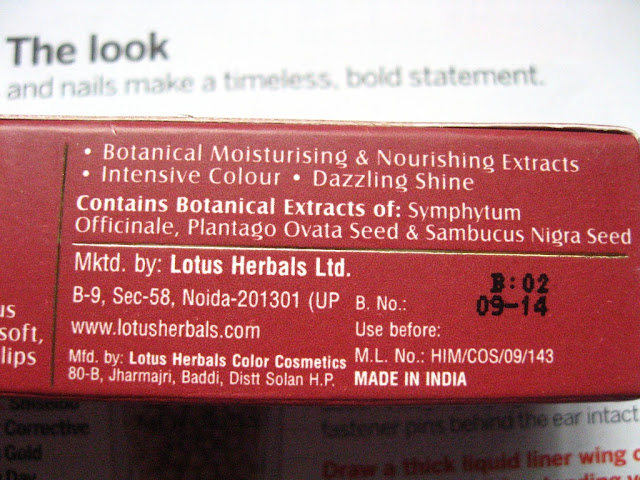 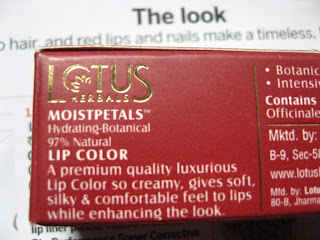 Now, when I tried these on, I was pretty surprised with the pigmentation. It goes over so easily and one swipe would give you enough of color to hide pigmentation. The smell is peculiar. Those of who have used Rimmel Lipsticks, I would say its close to Rimmel Moisture cream Lipsticks. Those of you, who have used Boroline, I would say it mildly smells of it.
I got the shades Raspberry Punch ( which looks far from Raspberry),  Raisin Beam which is maroonish red and Red Rover, a red with orange undertones with finely milled golden shimmers . The shimmers doesn;t show up at all and imparts a fine sheen. 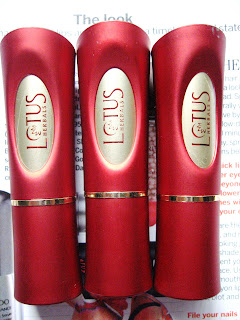 What I so Liked about these?
1) Very pigmented. Yes, that's the best part.
2) They do not have strong scent. The mild one vanishes after a few minutes.
3) The quantity is good for the price.
4) The package is classy. The outer carton is all the convenient as it has a hole through which you can see the shade number. So, finding the shades while in a hurry even if they are stored in the cartons, is very easy.
5) The tube with red body and the brand name on a special dis like design is very interesting.
6) The color stays put for a long time. On my lips it stayed on for 5 hours without eating or drinking. After which it kind of dried up. When I applied some lip balm of top, it was almost as good as fresh. Na, not really, It looked more like a very pigmented stain. Unless you look very close , it seems like you have applied the lipstick anew.
7) Sometime or other there is a BOGO offer going on. I took advantage of it.

Dislikes:
1) Could be less pricey. Lakme and Maybelline comes at 225. So, shelling our a 100 bucks more, we can get two of those. But then, this of way superior than Maybelline Moisture Extremes IMO
2) We could make use of magenta, pinks, corals and peaches. Most of the shades range from nudes to browns and maroons and mauves. I hope more shades like bright corals are included in this range
3) I wish they named the shades according to the relevance. my friend bought a floral glam. it was a nude. Simple nude, but was named Mauve something. My Raspberry looks more like blackberry ( not the phone).

Overall, I am digging in it. What about you?

One of the lipsticks was sent to me by the brand for consideration. But that has not affected my review
Lip Lipstick Lotus