I won a giveaway and a friend!!!

on August 13, 2012
Did you know I had won a huge giveaway? I could not believe mu luck when I won Indian beauty Journal's second prize!! It was just a shock!!
Preetha, had mailed me telling me I won and for a moment I was dumbstruck. When I realized what it was, I did not know how to react!

She had been through a lot with her grandma passing away and her mother very ill. Even then, she became restless because she couldn't ship in the prize earlier! Now, silly me, since she was planing to get the gel liner, I asked if I could go for a lipstick in stead! Nice as she was, she also included a wonderful eyeshadow which I absolutely adore!! Here are the goodies!
An Inglot lipstick and an eye shadow!!! AND A FRIENDSHIP band!! 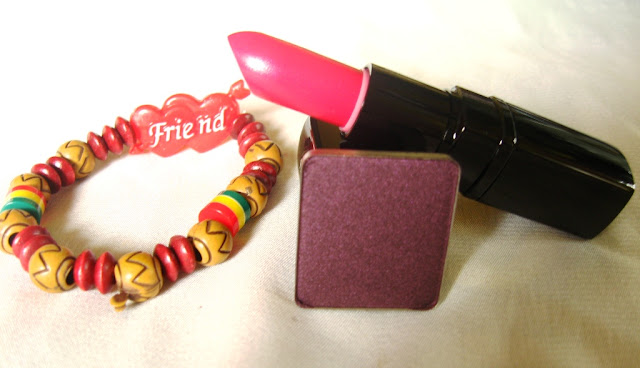 We had always been following each other, but since your pleasant conversations through emails, texts and even call on one occasion, I believe I have found another good friend here in this blogosphere.
Here is my band on me 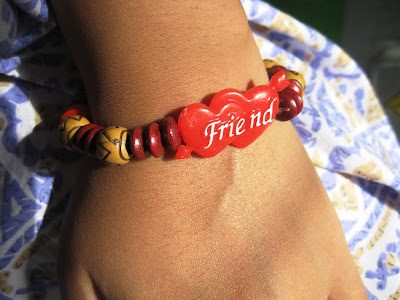 Even though the virtual world has not been kind to everyone, I feel lucky. I feel lucky because  here, I have found some wonderful friends and my connection with them is not limited to beauty and beauty blogging. I feel thankful I have found some friends I wouldn't have met otherwise.
And not the least, I must say, I love the kind and loving words that you leave in the comment box. perhaps, I am not able to respond right then, but yes,  make it a point to respond at some point of time or other.

So, how do you like my prize?Do I  see you turning green??!!
Giveaway

In my ancient review of Himalaya Almond Cucumber Face Mask, I had dreaded it. Then came the orange Peel off mask ( which I just recalled I haven't used in ages) and now I am back with Neem Peel off Mask. Lately, I have really gotten way too lazy... feels I really need to shake it off because it is becoming a regular pattern and have been making excuses in putting things off for another time or being neglectful of my skincare. All that scrubbing, masking, etc had gone out of the window for sometime. A couple of days ago, I noticed how my skin has been taking the toll and that I needed a good

If you follow me on Instagram ( which you should for mixed bag of different things), you might know that I had received some PR items from The Body Shop's Shea Butter range. Honestly, I take my time  I use the products for a long time or use it frequently enough before I dish out the reviews. The Body Shop Shea Butter Hair Mask I was more delighted about the hair products because needless to say, these days, more than makeup,