During my haul from Coastalscents, I really went crazy. I had been having sleepless nights for brushes and along came the Brushfire Sale where my friend Pooja from IBC and I promptly placed a huge order. I don;t know if I should like this brush or diss it.  Read on to find out why

The photo that you see is my uncleaned brush. So, if your curiosity gets better of you, try to ignore the stains :P

The site described it as a duo fibre synthetic ROUND blush brush.
Little did I know back then which is far from being the case.
The brush is not round, but OVAL!


When I received it, my first impression was that the head is pretty small.


My experience: When I tried working with my powder blush, it did not pick up the color too well and I could not do the blending too nicely. Firsty because, since this is synthetic and the brush head is not the regular soft kind, the color went over kind of too defined and was a bit difficult to blend about.
I gave up and kep wondering what to do with it.

Next I tried putting on my Lakme Invisible Finish Foundation and I was amazed at the airbrushed finish it gave.
I also tried putting on TBS cream foundation ( review soon) and the result was the same. Rather, I needed way lesser amount of product that I usually do and it gave a natural air brushes finish.
if you think the head is too small for foundation, I would say 'No'. because the head is small and oval, it is easier to go over the contours easily and reach out the corner of the nose, under the eyes , etc and get a better finish out of them.
I also tried my faces cream blush and it worked great.

So, my verdict would be, the brush is a failure if you work with powders, but it;s great to work with liquid and esp cream products, both liquid and cream and does a great job at stippling as well.

Bristles: The bristles are not the regular soft kind. They are smooth and not scratchy. Att he same time they are stiff enough to work with both liquid and cream products.
NOT a single bristle shed in my so far fifth wash. The smaller fibres of the duo fibres are densely packed. I would have preferred had the longer bristles are a bit more dense as well. But, I should have gone for the Stippling brush instead I think. 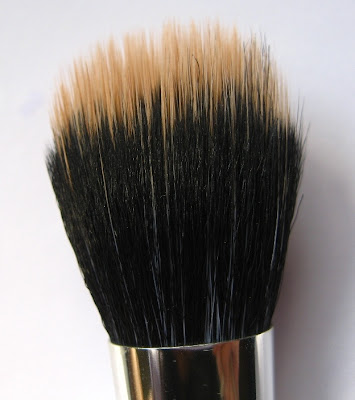 Overall I am too happy with it. For $6.95   I think it's a bargain. I think this would last me a lifetime since I usually handle my things with care.
I would say go for it if you can.

Have you tried this brush? What do you think?
Brush Coastalscents