Black Dog is a famous Scotch whiskey which was brought to India by Walter Millard of East India Company. The blends which form this scotch come from all regions of Scotland. According to a report of International Wine and Spirits Research,  it is the world’s fastest growing Scotch whisky by volume
Black Dog Scotch Whisky is available in four variations: 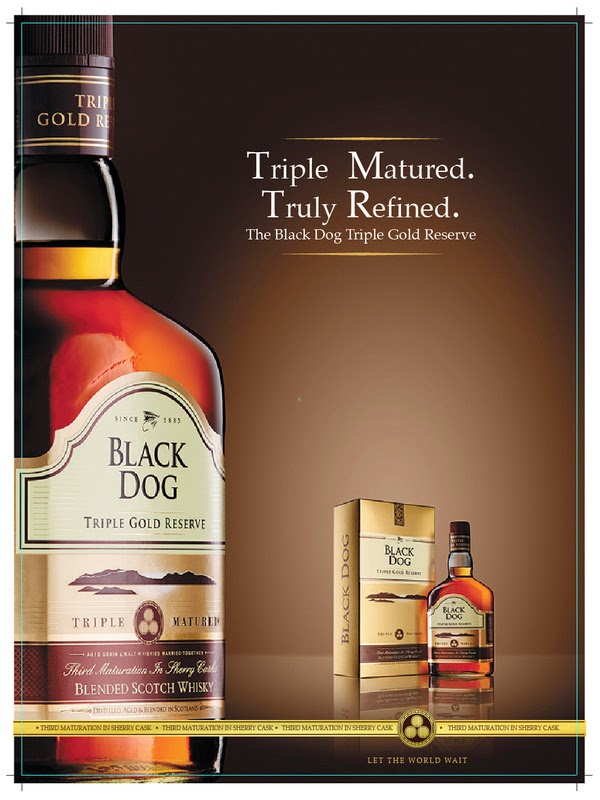 ·        Black Dog Reserve Aged 18 Years Blended Scotch Whisky – This scotch is a pure blend of aged malt and grain whiskies, which are generally aged for around of 18 years in oak casks. It was launched in April 2011.

·        Black Dog Quintessence Aged 21 Years Blended Scotch whisky – This vintage classic comprises of 25 single malts and grain whiskies distilled from highland region of Scotland – to be more specific from Speyside Valley. The age old drink is matured in used Oloroso sherry butts. Being a   limited edition, only 3540 bottles have been produced so far.

The latest offering from the brand is Black Dog Triple Gold Reserve. As the name suggests, it is the only blended Scotch that is produced involving triple maturation process. The triple maturation process which involves Grain whiskies and Malt whiskies separately matured in American Bourbon Casks and  then blended together and matured again in Oloroso Sherry Butts for an extra longer period of time to give the blend a distinctive flavour and a delicate finish. This gives this scotch a very fine finish and can be compared to any 12 year old scotch.

So raise your glass and CHEERS to Black Dog!