More of Madness at #DovePlay in Mumbai

Since play dates don’t happen once we are grown up, I am too excited about the Play Date with Dove. So, here goes the continuation of the first part.
After the madness with the hoola hoops, if I am not messing up the order, we had a ball in a ‘ball room’. Ok. This was a different ball because we are not doing grown up things now. There were enclosures with lots of balls, yes, like kids do have! Three persons were to throw only the grey balls with ‘Dove’ on them and two were supposed to catch. Oh, I did well at last. Our team collected a total of 289 balls! Would you believe that! My feet were aching with all that running but well, it was so much of fun! I wish I could continue more!

After that round, now was the time to Play With Hair!! We were ushered in a hair dressing room. Now, the team members were supposed to do each other’s hair and the team finishes first would be the
winner. I was pretty scared. I am so bad at doing hair, that I always let me hair loose. But, there were some easy instructions which came handy and boy! I did manage not only kind of doing most of my hair, but managing Ekta’s hair as well!

I was so happy with my low bun complete with white Dove flowers that went perfectly with my dress! I wish, I were less enjoying myself and remembered to shoot my hair!

Now, even though we were acting like kids, Dove never forgot  to treat us like queens! There were hair stylists who gave hair makeovers. Everyone was so rushing and the chairs were occupied. So, even though I regretted, I decided not to get my hair done and instead, I kept watching what the stylists were doing. I believe I learnt some tricks. (Share that later).

The next rounds were making a cocktail and Crystal maze.
Ekta went to represent our team and the poolside at the hotel was simply enchanting! There was so much of rush and the chief bartender explained the key ideas of making a cocktail. I wish I could make one as well! But Ekta did a good job!

I was too tired and happened to miss the last Crystal Maze and the after party dinner and now I keep regretting because who does that?!!! I was also so looking forward to meet more bloggers who I have known on the internet. 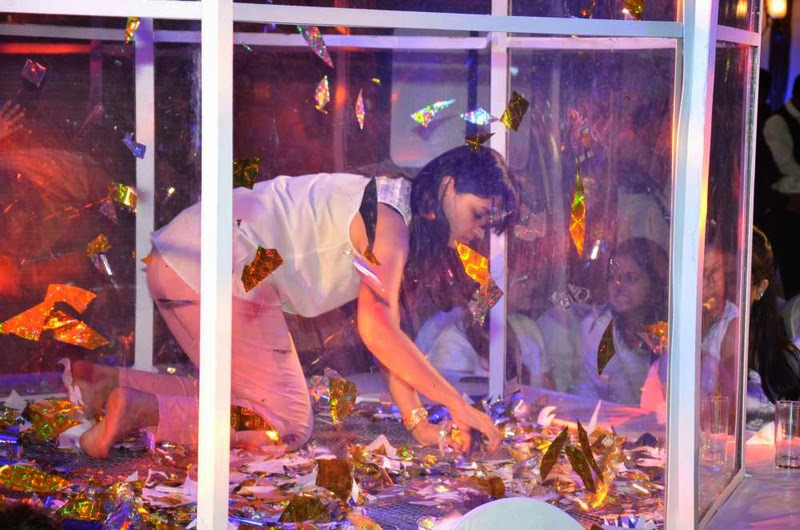 Let me share some photos in the next post.
Play date, hair make over, good food; the pampering did not stop there. We also received a huge goodie bag from Dove.

Also stay tuned. Find out everything in the next post! There you would meet some bloggers as well!
Blogger's event Dove Dove Play